Artificial Nest for the Neighbor Owls

Yep, I'm off the deep end. We just put up an artificial nest in an attempt to get the neighbor Great Horned Owls to nest in our yard, right outside our bedroom window. If they do nest here, we could be courting danger. They could be aggressive toward humans so close to their nest, Alice could have a cow over them being out in the yard all the time, or who knows what else could happen.

I've been working on taping the various calls of the Great Horned Owl, since no one has ever done a vocal study on the species, and I have a dying curiosity about their vocalizations. Bruce Marcot, the sound specialist for the Global Owl Project, has graciously spent a huge amount of his time transferring my taped calls to computer files that can be analyzed or played. But I'm lacking in the calls-around-the-nest department. Since it's unlikely we'll ever have Alice attempt to hatch out a fertilized Great Horned Owl egg, the next best thing I could figure to do was to lure the resident owls to nest in our yard.

Will they nest in this nest? We'll have to wait and see. I can pretty much guarantee that they'll find it, since the neighbor owls (especially the male, who I've named Victor) spend a lot of time hooting in the pine trees in our yard. As a matter of fact, I went to work awfully groggy a few days ago because Victor hooted from the pines from 1:15 AM until I got up at 7:00 AM. And it wasn't just his regular hoot. It was his wound up hoot that sounds like a version of "Let's Go Boogie Down!", with squawks to fill in the minutes between wild hoots. I got plenty on tape, but didn't get plenty of sleep. So they'll find the nest for sure.

Will they use it? is another question. It will probably depend on how many other suitable nest sites are in their territory. I have seen several nests that might work, but none look overly sturdy for a family of Great Horneds. And Great Horneds are tough on nests, so they can't often use them for more than a few years before they have to look for a new nest. Another thing to consider is that our yard is near the east boundary of their territory. I'm not sure if that would bother them, or if they'll just boot the former residents farther to the east if they do choose to nest in our yard.

At the very least, I should be able to observe them checking out the nest. I'm either blessed (or cursed as the case may be) to be extremely tuned in to Great Horned Owl vocalizations, so I normally wake up when they're vocalizing in the yard. (Believe it or not, I once heard them hooting in the yard with the room humidifier and furnace running, windows closed, and silicone earplugs in my ears!)

The artificial nest is made from the plans in the book "Woodworking for Wildlife" put out by the Minnesota Department of Natural Resources. Ironically, there is no wood in it. It's made from a cone of chicken wire with a cone of tarpaper inside. Then we had to build a stick nest inside, wiring some of the larger sticks to the wire frame for stability. I sure gained a new respect for birds who build nests! I couldn't have done it without cheating and using grapevines and wire. 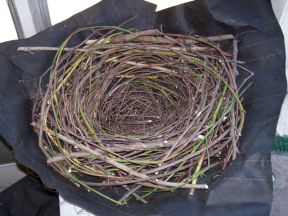 The next issue was where the nest should go. I found a spot in the pines (again, directly out our bedroom window) where there was a clear flight path for the owls up into the tree. There were two branches making a fork right up against the trunk, so that was the place it would go.

But how to get it up into the tree? I had visions of an extension ladder in the bucket of a tractor raised to full extension, but that didn't seem too safe. I didn't know anyone with climbing spikes, and there weren't enough branches to climb it otherwise. So after quite a while of hemming and hawing, I got up the nerve to call the CEO of Tri-County Electric Cooperative, our local electric company.

If I remember right, Brian Krambeer said "yes" before I even finished explaining and asking. COOL! They just would like to take some photos for the newsletter. Double cool.

Today was the day. Just before a storm came in, two of the linemen came with a boom truck. One had no idea they were here to put up an owl nest. :-) I explained where I wanted the nest and how to put it up there (keeping wire away from anyplace the owls' feet might go), and they took care of the rest like pros. A dead branch came down and another small one was trimmed out of the way. Then the nest was wired into the fork in the branches up against the trunk. The final touch was adding the cedar wood shavings as a lining for the nest. Ta da! 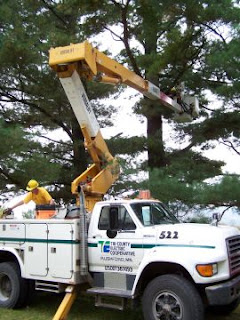 I do have to say the nest looks much smaller up in the tree than it did when I was working on it. It's somewhat oblong, but over two feet in the longest dimension.

Now it's time to just sit and wait and hope.
Posted by Karla (Kinstler) Bloem at 2:39 PM

Donate to This Research through the International Owl Center